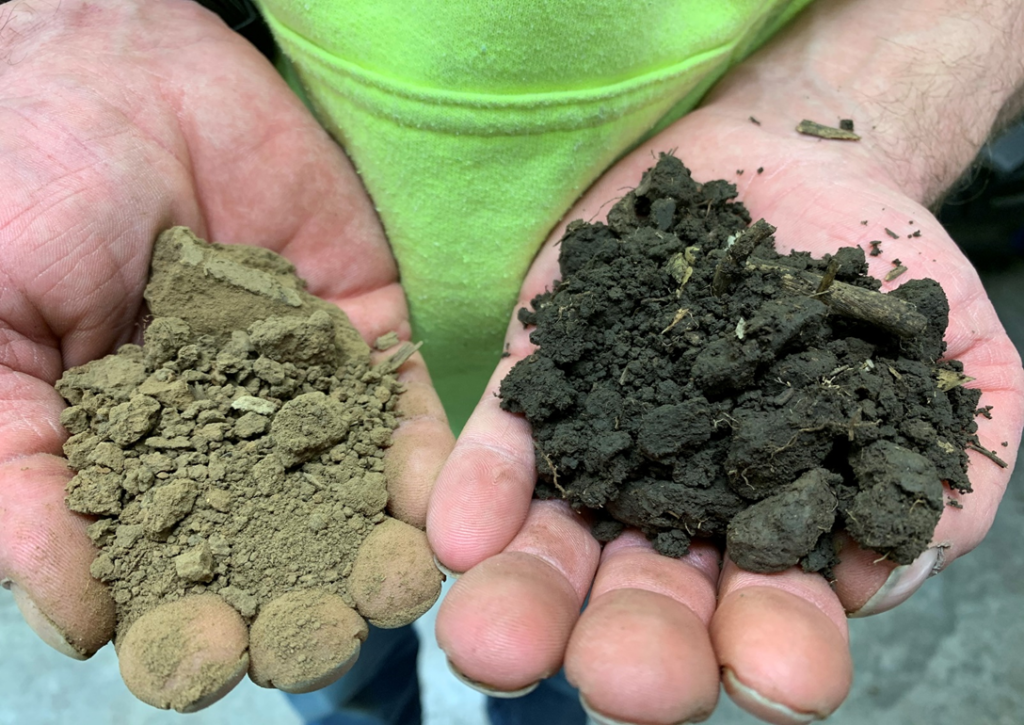 Plants build themselves from sunlight, water, and soil. And, as it turns out, what crops “eat” can influence the nutrients on our own plates.

A recent study, published in the journal PeerJ, compared the nutritional content of food crops grown using conventional versus regenerative farming practices — those that build the soil by using cover crops, a diverse rotation of crops, and minimal tilling.

“It was very difficult to find studies that had explicitly looked at soil health and how that affects what gets into food,” lead author David Montgomery, a professor of Earth and space science at the University of Washington, told Mongabay. “We did the experiment that we wished was out there.”

The researchers turned to a network of farmers who they knew had successfully rebuilt soil fertility on their land using regenerative agricultural practices. Ten regenerative farms agreed to grow 1 acre (0.4 hectares) each of peas, sorghum, corn, or soybeans to compare results with the same crop grown on a neighboring conventional farm.

“The goal was to try to get some direct comparisons, where you controlled for key variables: The crop is the same, the climate is the same, the weather is the same because they’re right next to each other, the soil is the same in terms of soil type, but it’s been farmed quite differently for at least five years,” Montgomery said.

Food grown on the regenerative farms, they found, contained, on average, more magnesium, calcium, potassium and zinc; more vitamins (including B1, B12, C, E and K), and more phytochemicals. They were also lower in elements that can be detrimental to human health, including sodium, cadmium, and nickel.

“Across the board we found these regenerative practices imbue our crops with more anti-inflammatory compounds and antioxidants,” Montgomery said.

They also found that beef and pork raised on one of the regenerative farms had higher levels of omega-3 fats and a more health-beneficial ratio of omega-6 to omega-3 fats than meat from local supermarkets.

Montgomery and study co-author Anne Biklé further discuss the link between soil, crop health, and human health in their upcoming book, What Your Food Ate, due out in June.

“We were thinking about the word ‘diet’ writ large, and asking, ‘What is the food eating? … If you think of a crop as having a diet, that’s really what you feed the soil … how you fertilize, how you treat the land and so forth,” Biklé said.

The regenerative farms had overall healthier soil with more carbon, as measured by their organic matter and a test that determines the quantity of soil nutrients available to soil microbes.

A healthy soil ecosystem is brimming with a diversity of microbes. All plants, including crops, have a microbiome (an internal community of fungi and bacteria similar to the human gut microbiome) drawn mostly from the soil. A diverse suite of fungi and bacteria helps recruit and boost beneficial compounds, such as the micronutrients and phytochemicals linked to human health.

Think of the microbiome as a soccer team: A plant grown in healthy soil has a massive recruitment pool and can play with a full first-string roster and plenty of backups. A plant grown in poor soil can only recruit in the neighborhood, and may end up with just a bunch of goalies — it can function, but not optimally, and it’s probably not drawing in sponsorships or recruiting the best players for next season.

“We can intuitively have a good sense that if you improve the health of soil, that you’re going to improve the nutrient density of the foods you eat, but there hasn’t been that much research,” Fred Provenza, a  professor emeritus at Utah State University, who was not involved in this study, told Mongabay. “So it’s very nice to see studies and they really looked at a wide range of different plant species across the country. I really applaud the work that they did.”

Regenerative agricultural practices — such as planting a diversity of crops, rotating those crops, and using no-till methods — foster diverse and healthy soil microbiomes.

Tillage, a common practice in both conventional and large-scale organic agriculture, breaks soil particles apart, making soil organic matter available to be eaten by microbes, which, in turn, release a lot of fertility. The problem with tilling, said soil expert Dale Strickler in a 2021 interview with Mongabay, is that it eventually degrades the soil.

“You eventually run out [of organic matter] and then you’re so much worse off than ever before,” Strickler said. “And now your soil doesn’t absorb rainfall, the roots can’t go in because there’s no structure, there’s no oxygen movement, no gas exchange, and you’re stuck. You’ve got dead soil.”

All told, the study examined eight pairs of regenerative and conventional farms across the United States, in the states of North Carolina, Pennsylvania, Ohio, Iowa, Tennessee, Kansas, North Dakota and Montana. One thing that stood out, Biklé said, was the variation in soil between all the farms. Though regenerative farms had healthier soil, the difference in soil among sites varied immensely among far-flung locations.

The authors say they hope this kind of work continues on a larger scale, to capture even more of the variation in soil among regions and farming techniques.

“The biggest criticism I would have of this study is small sample size — that’s why the paper’s title includes the word ‘preliminary,’” Montgomery said. “I’d like to see a lot more studies start quantifying: How do differences in soil health affect the quality of crops that come from that land?”

Provenza said he would love to see a study looking at flavor comparisons between farming techniques, because phytochemical richness can influence the flavor of foods, and phytochemical levels have declined with conventional agricultural practices.

“You go to the store nowadays and fruits and vegetables can look great, but as we all know they have absolutely no flavor whatsoever,” Provenza said. “And that’s reflecting that huge decline in phytochemical richness from conventional agricultural practices that kill the soil.”

“It may be that one of our biggest levers for trying to combat the modern public health epidemic of chronic diseases is to rethink our diet,” Montgomery added, “and not just what we eat, but how we grow it.”

Liz Kimbrough is a staff writer for Mongabay. Find her on Twitter @lizkimbrough_