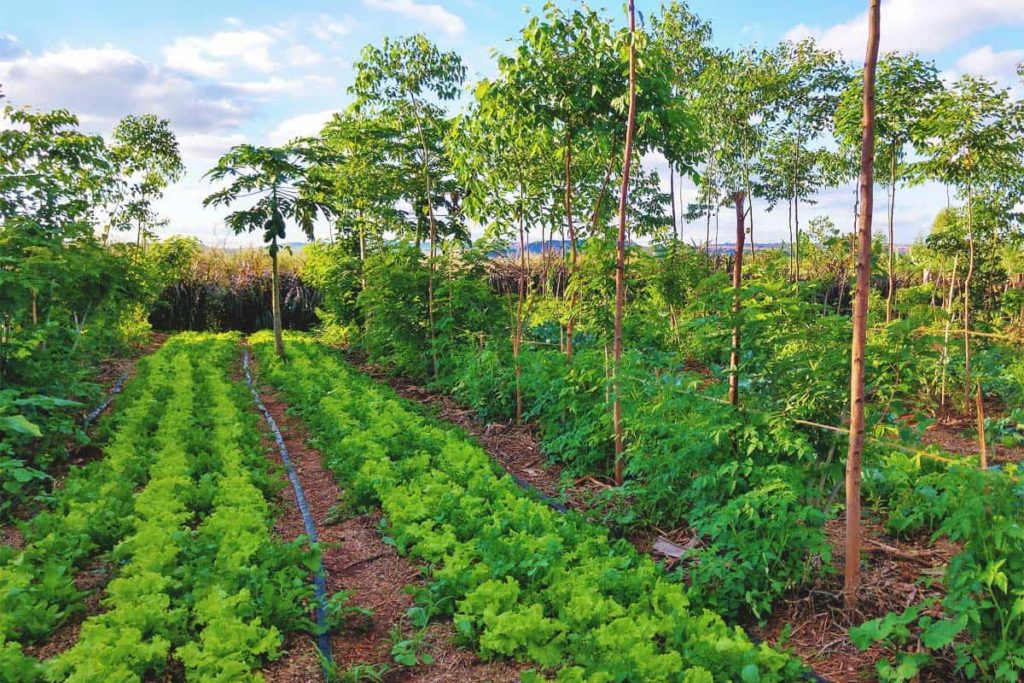 Regenerative agriculture is an advanced method of agriculture that follows the example of nature to grow healthy nutrient dense crops profitably without chemical fertilizers or poisons. It increases plant health and nutrient density, which increases the health of the people that eat these plants. It is also a major solution to global warming and climate change and beneficial for our environment.

Earth’s cultivated soils have lost over 50% of their carbon because of excessive tilling and the use of chemical fertilizers and poisons. This carbon is currently floating in our atmosphere and is a major cause of global warming and climate change. Regenerative agriculture regenerates the soil using photosynthesis (solar energy) to replace organic matter (carbon) back into our soil.

First it is important to understand the important role microbes play in feeding plants. Regenerative agriculture is based on the scientific knowledge that plants have evolved over 450 million years in a symbiotic relationship with microbes. Microbes are microorganisms, like bacteria, that can only be seen with a microscope.  There are more microbes in a teaspoon of healthy soil than there are people on earth. Healthy soil is literally alive.

Plants have evolved  to depend on microbes for most of their food. Microbes break down,  digest, and excrete nutrients from organic matter (decomposed plants) and minerals (from rocks and soil particles) into water soluble nutrients, which plants can absorb as they absorb water.

Many different species of microbes break down, digest and excrete many different nutrients to provide plants the nutrients they need to grow and be healthy. Billions of bacteria around plant roots provide FREE FERTILIZER as their nutrient filled bodies die and decompose, or when they are eaten and excreted by larger microbes.  Fungal microbes act as root extensions. They live closely with the plant roots and extend their long thin root-like strands of fungal cells far out from the roots. They absorb water and use enzymes to dissolve minerals and organic matter to bring to the roots. This multiplies the roots ability to absorb nutrient rich water. Microbes that evolved, along with the plants, have become experts at feeding and protecting plants and keeping them healthy. Healthy plants develop larger root systems. Larger root systems are very important to microbes because…

Plants exude a nutrient rich sap from their roots. Bacteria and fungi are attracted to the sap because it has photosynthesis-derived nutrients, only available from plants they need for energy, growth, and reproduction. Microbes have evolved to depend on plant sap for most of their food.  Microbes primary goal is to feed the plant and keep it healthy. Healthy plants develop larger root systems that exudes more sap so they have abundant food to flourish and multiply.

Plants make this sap by absorbing carbon dioxide (CO2) out of the atmosphere through microscopic holes in their leaves. They separate out the carbon, (the C portion of the CO2), which is the basic building block of life. Plants combine this carbon with water their roots have absorbed, which carries minerals and nutrients microbes have broken down. They organize the carbon, minerals and nutrient-rich water to create a nutrient-dense sap. The sap is used to nourish and build their bodies. This process is called PHOTOSYNTHESIS and is the foundation  of life on earth. Plants use  PHOTO (light) energy  from the sun to SYN(mix) the carbon with the nutrient-rich water and organize (THESIS) it into nutrient -rich sap. Leaves also act as bio-photovoltaic panels to absorb photonic (light) energy from the sun. They use this energy to move the nutrient rich sap through their vascular system, which is similar to our blood system. Most of the sap goes to nourish and build the plant. About 30% is exuded through the roots to attract and feed microbes.   Plants release the O2 (oxygen) portion of CO2 back into the atmosphere where it is fundamental to life on earth. This is the source of the oxygen that people and animals breathe.

It’s simple…just do what nature has done FOREVER. Keep soil covered with plants or plant residue like compost, mulch, crop residue or cover crops. Cover crops are crops grown between cash crops to be returned to the soil to replenish organic matter. Organic matter feeds microbes and other soil creatures. When fertilizer is needed, it is derived from natural sources like animals (manure or animal by products), natural mineral sources like kelp or ground rock powders, or plants (compost, mulch or cover crops).

We brilliant humans have figured out how to grow our plants faster, easier and cheaper. Conventional chemical agriculture focuses on higher yields, money and short-term profit…NOT NUTRITION OR HEALTH.

SURVIVAL OF THE FITTEST

Undernourished, unhealthy plants are very susceptible to disease and pests. It is a scientific fact that insect pests and diseases attack nutrient-poor, unhealthy plants to eliminate them from reproduction (survival of the fittest). Unhealthy plants require pesticides which further kill the life in the soil.

Most agriculture today is degenerative. Conventional chemical agriculture ignores the life in the soil that has evolved symbiotically with plants.  It kills microbes and soil life with tilling, chemical fertilizer, herbicides and pesticides (poisons). Each crop mines out organic matter and minerals that nature has accumulated. It does not replenish the organic matter like nature has done forever to feed the microbes.  The soil becomes more and more depleted. People and animals eating nutrient-poor, chemically fertilized foods with pesticide residue become less healthy.

We’re getting plenty of fatty, sugary calories, but we’re hungry for nutrients.

Chemical industrial agriculture provides quantity (calories) that keep us working,  but not quality (nutrients) that keep us healthy. The way our food is grown and merchandised has been changed by corporations that put profit before nutrition and health. Today’s food has a longer shelf life, and is faster, easier and cheaper to produce, but not nutritious. It is highly processed and high in calories because it contains cheap, refined carbohydrates, and industrially processed oils and sugars.

Chemical agriculture works great for the profits of the giant government subsidized industrial agriculture, chemical (fertilizer and pesticide)  and pharmaceutical corporations, but bad for peoples health, finances and happiness.

These corporations  strongly influence our politicians and government agencies (FDA, USDA, EPA)  and college agricultural curriculum to promote chemical agriculture. The corporations are getting richer, but people are getting sicker, fatter and poorer.

MICROBES TO THE RESCUE

Remember the goal of microbes is to optimally nourish the plant with macro, secondary and micro-nutrients, trace elements and everything the plant needs when it needs it. Microbes want the plant to be optimally healthy so it produces a larger root system and exudes more nutrient- rich sap so they can flourish and reproduce .

This natural way has worked FOREVER and is the healthiest way for plants, animals and people. All we have to do is stop killing the microbes and soil life with tilling and chemical poisons and start feeding them naturally.

The best we can do now is buy or grow organic (preferably local) and eliminate processed foods.

This evolutionary step gives consumers the option to purchase food that is not only grown without chemicals (organic); but is also produced to be nutrient dense and SUPPORT OUR PLANETS HEALTH.

The carbon cycle is more complex. Plants absorb CO2 (carbon and oxygen)  and use photosynthesis to separate out the carbon. They use the carbon to build their physical bodies and release some through their roots to feed microbes. This removes the carbon from the atmosphere where it causes global warming. Some carbon is sequestered in the soil by the roots and microbes. Some is exhaled by microbes and other soil life as carbon dioxide. Plants have evolved to have most of their microscopic pores that take in carbon dioxide on the bottom of their leaves. If there is not a plant above to capture the carbon dioxide it is released into the atmosphere to cause global warming.

These carbon and hydrological cycles  have been damaged by::

2.  Degenerative agriculture expediting the release of carbon from the soil

3. Herbicides and pesticides that kill soil life that sequesters carbon in the soil.

These 2 cycles are interconnected:

1. Too much carbon in the atmosphere holds in heat and raises the temperature.

Replacing fossil fuels with renewable energy is priority #1, but does not REDUCE the carbon in the atmosphere. The only way to get carbon out of the atmosphere and return it to the soil is photosynthesis.

can restore these important planetary carbon and hydrological cycles.

– Eliminating tilling along with chemical fertilizers and pesticides allows worms, fungi and other soil life to thrive and create aggregates, tunnels and air spaces in the soil. This allows  water to percolate and be absorbed by soil carbon instead of evaporating into the atmosphere and washing away top soil.

– Aggregates are small clumps of soil held together by a glue-like substance excreted by worms and fungi that binds soil particles into clumps. The clumps leave spaces in the soil that allow air (oxygen and nitrogen), water, and root penetration..

-Tilling leaves the soil bare ( fallow). Tilling, without planting a cover crop, is inviting natural plant life (weeds). Weeds are trying to fulfill their mission to cover and cool the soil and photosynthesize carbon out of the atmosphere into the soil. Conventional Degenerative agriculture kills this natural life with herbicides or more tilling This kills not only the weeds but also the microbes and soil life that are important to the carbon cycle.

Bare ground also increases Global Warming by reflecting more heat back into the atmosphere than ground covered with plants.

COVER CROPPING  ~   NATURES WAY TO TILL

Cover cropping is the key to biological cultivation. It starts with the plants using photosynthesis to produce food and shelter for soil life. The worms, microbes and other soil life create aggregates, tunnels and air spaces that aerate and improve the texture and permeability of the soil. This saves the cost of tilling.

– Cover crops absorb carbon out of the atmosphere and sequester it in the soil. The carbon absorbs and stores water. This saves money on water and irrigation.

-Cover crops shade and cool the soil, which reduces heat reflected back into the atmosphere.

– Cover crop residue can be crushed and compacted to form a mat (organic mulch) that prevents weeds. A farm implement (crusher-crimper) is available to produce the mat. Another implement is available to make holes in the mat to plant a seed or seedling.

Hawaii needs Regenerative Organic Agriculture. Our prime agriculture land has been degenerated by short-sighted, profit-centric agriculture.  County and State government could facilitate and support agriculture that is healthy for our people and aina by funding qualified consultants in the Dept. of  Agriculture to educate farmers to transition. Transition (regenerating the soil) takes 2 or 3 years and could be subsidized and incentivized through carrot and stick ag taxes.