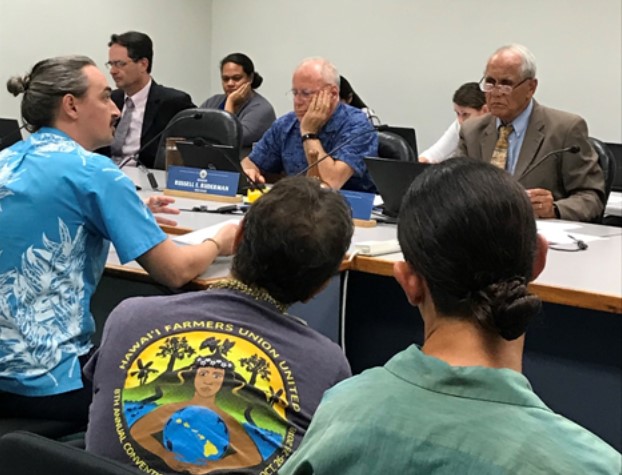 A new bill is being evaluated by the House (HB1892) and Senate (SB2722) in Hawaii that would allocate funding for food hubs on all islands. Food hubs are enterprises in or nearby farming communities that boost the island food supply by selling local food on behalf of small farmers and some backyard growers. Each year food hubs rescue tons of food from being wasted and create an extra income for small farmers.

Did you know that picking your fruits could make you a farmer? That is now true for 100 families on the leeward coast of Oahu who joined the Kahumana Farm Hub. The USDA definition of a farmer is anyone who sells or trades agricultural products worth $1000 per year. Most of the current suppliers of the Kahumana Farm Hub say that their fruits used to go to waste because they didn’t produce enough for traditional distributors to acknowledge them. After the food hub in Wai’anae launched in 2017 they now have a location nearby their homes to bring their fruits and vegetables that will help them sell their goods to local stores and restaurants. The social mission of Kahumana Farm Hub (KFH) is to connect local growers with local markets and in the first 2 years of establishing the hub, KFH sold 200,000 pounds of fruits and vegetables on behalf of their Wai’anae suppliers.

The official USDA definition of a hub is a centrally located facility with a business management structure facilitating the aggregation, storage, processing, distribution, and/or marketing of locally or regionally produced food products. The food hub prevents not only people’s backyard fruits from going to waste, hubs also add to the income stream of rural suppliers who live in areas with high economic poverty and food insecurity. Food hub suppliers supplement their income with fruit sales and some make over $1,000 dollars per year especially during mango season in Wai’anae.

Research by UH Manoa’s Dr. Noa Lincoln suggests that much of the local food grown in people’s backyards is unaccounted for and often overlooked in official reporting about local food production. The dark number of unaccounted local food is now being captured by food hubs all over Hawaii. A recent survey of 8 food hubs by Hawaii Farmers Union United shows that they represent over 650 small and medium farms and generate 2.7 million in income annually in local food sales.

Maureen and Tane Datta launched the first food hub in Kona, Hawai’i twenty years ago. At that time, Hawaii’s hotels and chefs, such as Peter Merriman and Sam Choy, were embarking on what would later be called the Hawaii Regional Cuisine. The Datta’s Adaptations Food Hub offered these Chefs a chance to offer an alternative Hawaiian cuisine by sourcing fresh and local ingredients from multiple small farmers. By representing multiple local growers, Adaptations was able to provide steady supplies of fresh, local food to hotels and restaurants in ways that one single small farmer could not.

Fast forward to now (2 decades later) the Department of Education, among other State institutions in Hawaii, launched ‘Aina Pono in part to serve more locally grown foods in Hawaii’s school cafeterias. ‘Aina Pono is approaching several food hubs as pilot programs to put fresh and local food on the school menu. One of the pilot programs is with the Hawaii Island Ulu Cooperative in KONA, Hawaii. Unlike the food hub at Kahumana Farms, not all food hubs focus on fruit sales. The Hawaii Ulu Cooperative promotes Ulu or breadfruit cultivation for a group of small farmers on Hawaii Island. They foresee an incredible increase in Ulu production and have secured a location in Kona to receive and process breadfruit. In 2019, the Ulu Cooperative supplied breadfruit to public schools on all Islands.

The entire island of Molokai is considered a low access zone or food desert. Sustainable Molokai food hub aggregated fruits and vegetables on behalf of 40 farmers on Molokai and provided food for 400 Molokai residents of whom approximately 25% are SNAP-EBT customers. Food hubs build their strength from having a large number of small producers and suggests that all of Hawaii’s people can become part of a growing family of producers. Together they offer powerful networks to improve our island food security, reduce relying on imported foods, and steady supplies for farm-to-state sourcing of local food. Food hubs promote a way of life that brings back Hawaii’s history of abundance and self-reliance and where all people and households can contribute to a better future together.