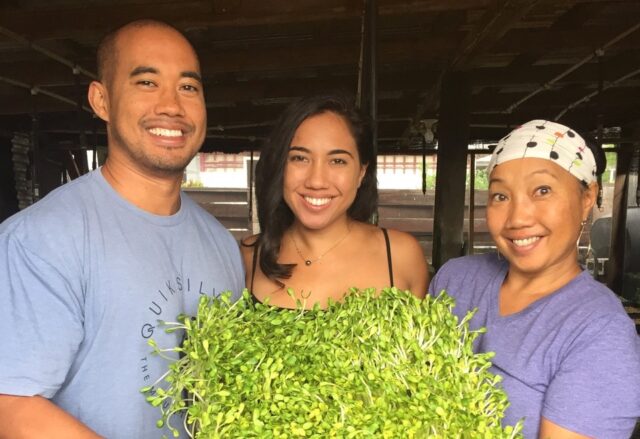 The Hawaii Farmers Union United celebrates a decade of existence with a major conference and optimism for the future.

Healthy soil has an architecture, a web of microbial life. When that web is vital and intact, plants flourish and express themselves as complete proteins. Healthy plants are resilient and strong and able to fend off pests and diseases.

Our agricultural system is no different. I have been farming on Maui for 27 years. It has been a blessing and a challenge. As the saying goes, “If you want to make a million farming, start with two million.” We mahiai — farmers — are not ones to look for a free lunch. We produce that lunch.

According to a recent report from the U.S. Department of Agriculture, for every dollar American consumers spend on food, U.S. farmers and ranchers earn just 14.6 cents. This value marks a 17% decline since 2011, and the smallest portion of the American food dollar that farmers have received since the USDA began reporting these stats in 1993. The remaining 85.4 cents cover off-farm costs, including processing, wholesaling, distribution, marketing and retailing.

Most of us in Hawaii are very aware of the issues with farming in our islands today: Land costs that are too expensive. Land ownership that is too concentrated. Soil that has been exhausted and depleted by industrial sugarcane and pineapple farming. Prime agricultural land laying fallow until it’s plowed under for housing developments.

People looking to get by on the cheapest food they can find for themselves and their families. Billions of tons of food coming from elsewhere on cargo ships. People with a passion for farming who don’t get support. Extreme weather that is growing more extreme every year.

But this is a story about the power of regeneration. In Hawaii our climate allows us to grow an amazing variety of crops, and we can produce three harvests of seed a year.

Hawaii is a brilliant impresario, producing a vast web of biomass in which plants grow and grow and grow and stretch their roots deep into the earth. When that biomass is allowed to return to the soil in the form of organic matter, it feeds our soil’s microbial life.

The world is waking up to the need to protect our agricultural soils from erosion, but the story goes much deeper than that. We need to nourish our soil. When we feed its microbes, they proliferate. They break down organic biomass and turn it into humus, rich soil that nourishes life and produces truly healthy food.

Humus holds moisture and creates pathways for water to filter down into our precious aquifers. It sequesters carbon and moves the planet away from climate change. Today, we can all use more of a sense of humus.

As farmers, we also need to be nourished. We need the metaphorical organic biomass that will cause us to proliferate and thrive.

My grandparents left Sicily for Philadelphia when they were young. I left Philadelphia for Maui when I was 24 years old. I worked as a decorative painter and met an extraordinary Hawaiian woman, Irene, whose son Kekai was just 10 months old. Irene and I married and I adopted Kekai.

When Irene was pregnant with our daughter, Kahanulani, she started craving sunflower greens and coming home with bags and bags of them. So I started growing them and that was the launch of our farm, Kahanu Aina Greens. Irene and I worked side by side. Kekai, the hardest and most disciplined worker you could hope for and a boy full of passion for farming, joined in as soon as the farm began, when he was 10 years old.

As we farmed, I learned more about soil and the relationship between its health and the health of our bodies. I began attending conferences and met remarkable experts in the field of regeneration. I befriended those experts and from 1998 to 2014, Irene and I invited many of them to Maui for “Body and Soil” conferences that we produced under our nonprofit Maui Aloha Aina Association.

A decade ago, I was a founding member of the Hawaii chapter of the national Farmers Union, which was birthed out of our efforts with Maui Aloha Aina. Today the Hawaii Farmers Union United has a thousand members. We have 13 chapters across the islands. We are made up of Hawaii farmers, gardeners and food lovers on all islands who value local agricultural systems.

As a collective, we have a voice at the table. The growth in our clout and credibility has enabled us to work as a group with our county officials, our Legislature and the Department of Agriculture. At the national level, I worked with the Farmers Union to create the Regenerative Agriculture Local Food Committee, which I currently chair.

In the week ahead, we will celebrate 10 years of the HFUU with a major conference. And because COVID-19 has moved everything online, it has never been easier to attend. All are welcome.

There will be virtual farm tours. Virtual chefs’ demos. We will have over fifty presentations, workshops from global authorities as far away as Australia and Austria. We will cover many topics, including composting, earthworms, trellising, Korean natural farming, bees, hemp, mushrooms and much more.

We will have five keynote presentations from leaders including one of Hawaii’s most esteemed elders, Maui kupuna Sam Kaai; mycologist Paul Stamets; and regenerative farming expert Joel Salatin. Keynote discussions will focus on nature’s soil rebuilding process and on the relationship between the soil’s mycelium network, our gut biomes and COVID-19.

At the end of the conference, we will have a free three-hour benefit concert curated by Micah Nelson, son of Willie Nelson. Many great musicians have volunteered to perform in support of Hawaii farming: the Nelson ohana, Jack Johnson, Flea, George Kahumoku Jr., Makana, Michael McDonald, Pat Simmons Sr. and Jr., Mike Love, Paul Izak and others.

If you want to learn more about food and farming in Hawaii, right now there could be no better place to start. Everyone who registers will have access to all presentations for a year and all of the costs of registering for the conference go to support the HFUU and educational outreach.

When I think about agriculture in our islands, I picture a Tesla that’s just sitting in the driveway. We are playing a very small game if we continue to rely on outside food supply to feed our local population.

And since this is the IDEAS section, I would like to share an idea of my own. It is an understanding and inspiration that has come from my own growth and experience as a farmer in Hawaii.

Our islands are perfectly situated to become a global leader in cover crop seed. Cover crops are crops that are grown in between production crops. They allow the soil to rest and nourish and feed its microbial life. They are the very essence of aloha aina.

Cover crop seed holds tremendous potential for Hawaii’s agricultural future. In our islands, we can grow three crops of cover crop seeds a year — seeds our farmers can use to build their own soils and seeds that we can sell around the world.

Across the globe and here in the islands, decades of industrial agriculture have withdrawn life from the soil. Big Ag has produced food cheaply by using chemicals that bypass and destroy the life in the soil instead of feeding it. The thinking has been short-term, not long-term. We can change that. The earth will collaborate and cooperate with us as long as we respect its natural laws and architecture.

As the understanding of the power of regeneration becomes more widespread, the demand for cover crop seed will only grow. And the demand is already huge.

I envision a cover crop seed industry that could be created on state agricultural lands in collaboration with the State of Hawaii, the University of Hawaii’s College of Tropical Agriculture Human Resources, the National Resource Conservation Service and the Hawaii Department of Agriculture.

I sit on the Board of Agriculture and I have been working to help bring this idea to fruition. It needs the support of government and the private sector. Farmers cultivate relationships with the earth and advocates cultivate relationships with people. I am committed to advocating and doing all I can in support of building a cover crop seed industry that honors Hawaii’s soil, that is founded on the principle of malama aina. I have not seen any better plan that protects our existing agricultural lands while utilizing the resources they represent.

As a regenerative farmer, I have a personal and ever–deepening relationship with the soil. It grows the food that nourishes my body and my body then works in service of the soil. Ultimately, one day I am going back to the soil. This relationship moves my spirit.

As a farmer, I let the soil decide what is going to happen. If I’m open and respectful, it teaches me. I act, I see the results. There are constant lessons. As a farmer, I haven’t arrived anywhere. I’m still learning. Nature continually forgives me and all of us.

This relationship is a primal relationship. For me, it is the only thing that gives reason to living and dying.

Last year our family experienced a tragedy when Kekai passed away at 35. He was as healthy as a person can be and fell to his death in a hiking accident. Kekai, a Native mahiai who had farmed alongside us for 25 years, who sang songs in Hawaiian to the plants as he worked, who loved the family farm, who had planned to take over and continue it.

When he died, we shut down the farm for four months for the first time in its 26 years of operation. Burying one’s child is something a parent never gets over, and beyond what Kekai meant to the farm, we just miss him so very much.

After he passed, Kekai came to Irene in a dream and asked her to create a community cart. Irene described it to a neighbor, who built it. Now in honor of Kekai, we put the cart out in front of the farm every Monday, Wednesday and Friday.

We fill it with produce from the farm. Others in the community take as they need and give as they can. The cart operates from and with the energy of regeneration.