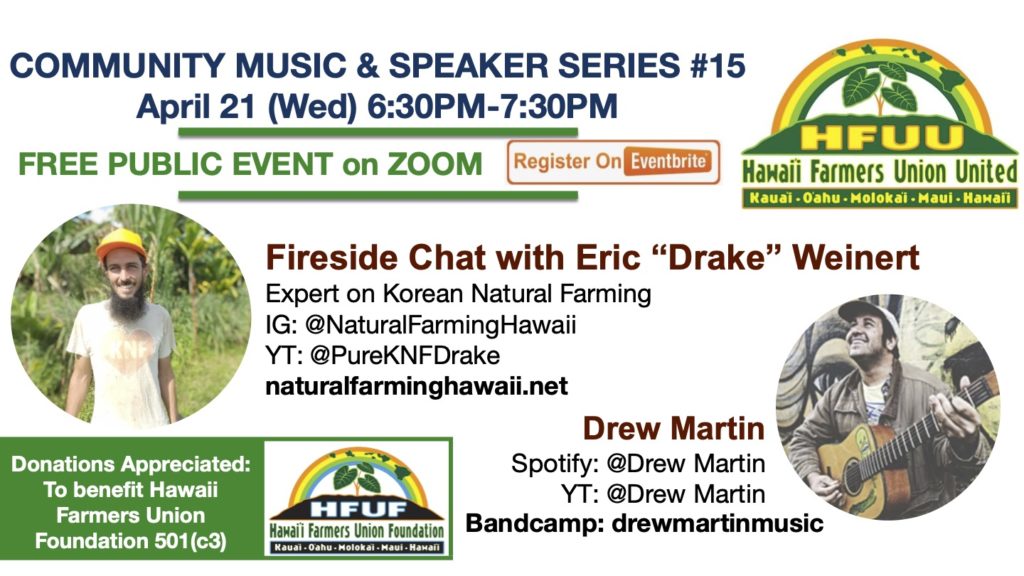 We were excited to have expert on Natural Korean Farming Eric “Drake” Weinert and Hawaiian slack key guitarist/folk-blues musician Drew Martin in a Fireside chat at our 15th Music & Speaker evening on April 21st. Watch is on Youtube in case you missed it!

Eric “Drake” Weinert Jr is somewhat of a micro-celebrity. He was on Netflix in the documentary In Search of Balance and has worked tirelessly since 2007 to promulgate the solutions of Master Han-Kyu Cho and Cho Young-San (Jadam) and establish Korean Natural Farming in Hawaii and the English speaking world. He is president of the East Hawaii Chapter of the HFUU, Director of the Pure KNF Foundation, and manages a 20-acre farm and learning center in Onomea on the Big Island of Hawaii.

Musician Drew Martin shares songs & stories from the West Maui Mountains and the valleys that have inspired his music. His sound is a blend of Hawaiian slack key guitar and folk-blues.

While his musical influences are vast, the story of how it all began is simple: Martin starting playing guitar at age 11 when he first developed the urge to learn an instrument. Initially inspired by BB King, he decided he wanted to play at 3 O’Clock Blues. So he bought, “this funky Epiphone acoustic guitar for $80 and hasn’t stopped playing,” for the past 17 years.