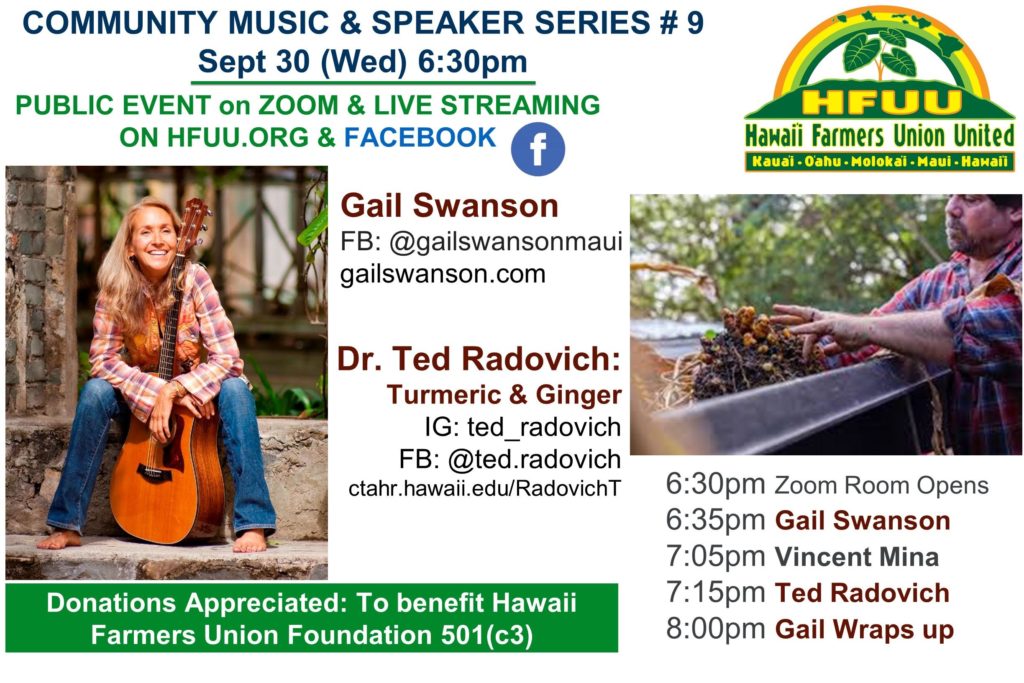 Aloha HFUU Ohana,
We are excited to have Na Hoku Hanohano artist Gail Swanson and Dr. Ted Radovich (Turmeric & Ginger) join us for this week’s Music & Speaker evening. This is a public event, please feel free to invite your friends and family.

Swanson independently releases, promotes and distributes her own music. Her fourth CD “Living in a Movie” won a Hawaiian music award, a “Na Hoku Hanohano” for BEST ROCK ALBUM OF THE YEAR. (Hawaiian Academy of Recording Artists) “Living in a Movie” features special guests, Willie Nelson and Pat Simmons. The double CD includes 8 rock songs recorded in Nashville with a full band, and 8 acoustic songs recorded on Maui.

Gail maintains a large and loyal fan base in Hawaii and all over the U.S. who support her solo acoustic shows when she comes to town. She promotes her own career with help from her regional fan clubs, street teams and on the internet.

As an artist, Gail loves to tour and perform. As a songwriter, her goal is to have major label artists record her songs, and to have her material in film/tv. Gail’s song co-written with Kristy Jackson, “Paper Doll”, was featured in the ABC Disney movie, “The Initiation Of Sarah” and her cover version of the Rolling Stones “Sympathy for the Devil” has been featured in two prime time television shows. (Sleepy Hollow and 666 Park Ave)

Born and raised on O’ahu, Dr. Ted Radovich is an alum of Future Farmers of America and the Peace Corps where he served as an agroforestry volunteer in West Africa. An extension specialist in the College of Tropical Agriculture and Human Resources with research and teaching appointments, he leads the sustainable and organic farming systems laboratory, teaches several courses and oversees 4 acres of certified organic land. His current state-wide program is focused on understanding how crop yield and quality can be optimized in agricultural systems that reduce reliance on conventional chemical inputs and increase use of ecological farming practices.

Dr. Ted Radovich, Principal investigator of sustainable and organic farming systems laboratory associate prof, since 2006. Olena or turmeric (Curcuma longa) syn. C. domestica, SE Asia, is one of our Hawaiian canoe plants. We have long valued and used it here in Hawaii.  It is a bit tricky to grow and perpetuate since it goes dormant in the winter time.

It has very pretty flowers which we call ‘Pua Olena’ here in Hawaii.  We even have a mele and hula about Turmeric.  The leaves are attractive and grow separately from the flowers stalks, which emerge in late summer, after the leaves have been growing for a while.

You can use the roots (rhizomes actually) for many recipes.  I grate mine with a micro planer, as I’m cooking and to add to drinks.  I keep the precious and ono rhizomes in the freezer until I’m ready to cook with them.

“Poor man’s saffron” turmeric is another name for Olena. It is the Base for common English / Indian curry. Local curry stew has a heavy turmeric base, Japanese sweet curry also has a heavy turmeric base. It has long been used in Ayurvedic medicine.  My friend from Sri Lanka shared a whole book on the medicinal uses with me. It is also one of the latest “super health” foods.  Everyone these days seems to be taking some form to cure inflammation, fend off Alzheimer’s, keep surfing or hiking etc. Read more…
(Taken from https://www.hawaiiscape.com/2017/07/olena-turmeric-research-uh/)