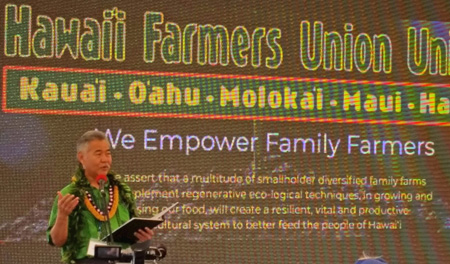 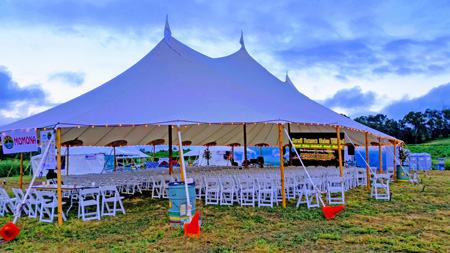 Sponsorships ranging from $500 to $12,000 each from over 25 businesses, nonprofits and government agencies fueled the event.  Sixty nine presentations presented by more than 30 speakers were enhanced by Hi-Def screens and held in three open-sided tents set up on the expansive sunlit slopes of Haleakala.  These included USDA-NRCS, soil health experts and other practicing soil scientists as well as a wide range of farmers and experts in regenerative agriculture. The expert presenters addressed how regenerative practices restore the life in the land, grow resiliency, and contribute to consistent production on the farm.  Rio Tent Design of Maui donated the use of four Sperry wedding tents. The impressive main tent that hosted the plenary sessions and larger workshops was donated. Pacific Biodiesel donated the generator and bio-fuel that powered the entire event. 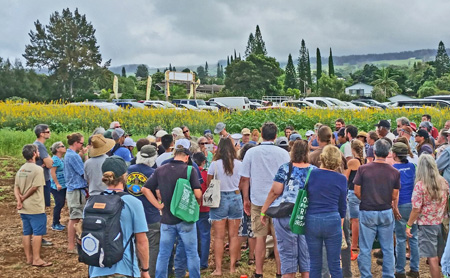 Hawai’i Farmers Union United represents over 1,100 members spread among 13 Chapters on the Islands of Kauai, Oahu, Maui and Hawai’i.  The Chapters range in size from 427 members in Maui’s Haleakala Chapter to Ka’u’s 16 members on the Big Island.  Each Chapter represents a unique geographic and cultural area.  Maui’s Mauna Kahalawai, at 220 members, is the second largest Chapter.  Its enthusiastic ohana supported the Convention with a $5,000 cash donation as well as cooking and serving three breakfasts and two dinners for all the attendees.  They also hosted a ku’i poi pounding workshop. Hot showers were provided onsite to campers. Other Chapters brought locally produced food and Hawaii grown coffee and tea.  Lunch was provided on site by Maui vendors:  Hi Thai, Cloud 9 Catering and the Maui Hamburger Company.

With the support of National Farmers Union legal counsel, Dave Velde, as Parliamentarian, the Convention also debated and adopted policies as “strategic priorities” to guide the Union’s leadership.  These included policies on Labor Retention and Marketing and Living on Farms.  Prior to the Convention, the Union conducted a survey of its members which revealed that between 52% and 96% of its members support initiatives to promote Union membership, strategic planning, communication and regenerative agriculture.  These were then proposed as policies that the Convention adopted by nearly unanimous votes. 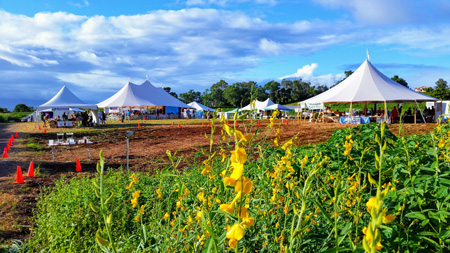 The members voted the morning of the final day on the election of a President to serve the next two years.  This was the first year in the last six years that there was a contest for the Presidency.  It was also the first year the Union implemented its system of delegate voting.  Of a total current membership of 1,195 eligible to vote, a total of 1,179 were present either in person or by delegates.  When the votes were counted, Vincent Mina received 964 or about 82% of the vote and the contender, Faith Chase, received 205 or about 18%.

This is how HFUU-HFUF president, Vincent Mina, summed up the Convention: “With the blessing of the land owners, and the cooperation and collaboration of Oko’a Farms, which is leasing the land, along with our enthusiastic cadre of sponsors and volunteers, we were able to host the agricultural event we all envisioned.”